Confession time. My whole adult life, I’ve had problems with binge drinking. For whatever reason, I have the predisposition for it, and once I have one or two drinks, I can’t stop until I’ve had ten and blacked out and ultimately passed out. It’s been this way pretty much since I turned 21.

At various points I’ve had pretty good success with staying sober. I feel like it’s a weird phenomenon, and a lot of people who don’t experience this problem don’t understand it very well. To me, staying sober is easy as long as I just consider drinking to be completely off the table and not an option.

However, the problem is that as soon as I start fooling myself that I can handle it, and one or two drinks on a special occasion won’t hurt, it’s like this long, slow descent into getting blackout drunk multiple nights a week starts, a process that I am not in control of.

The best metaphor I can think of is those “gravity well” things you may have seen at the supermarket or library. If you’re not familiar with the term (I didn’t know they were called “gravity wells” until I went to write this post), they look like a giant funnel. You put a quarter in via a little chute thing, and then it rolls around the circumference of the “well,” getting faster and faster until it ultimately drops into a hole in the bottom.

Having that first drink is like putting your quarter down the little chute. Once you’re in the well, you don’t really have control over what happens from there on out. For people who don’t suffer from alcoholism, their quarter stays up near the top of the well, rolling around, and it never really becomes a problem.

For people like me who do have alcohol problems, the gravity draws you inexorably downward over time, spinning faster and faster and more out of control as it goes. You can still keep up the appearance of control for a long time during this process, and your friends who are happily rolling along up near the top might see you pass by during one particularly high oscillation and think everything is hunky dory – but the trend line ultimately only ever goes in one direction.

I had quit for over a year the last time my drinking really became a problem, and everything was good – quitting cold turkey is the only way to shut off the little voice in my brain that constantly wonders when the next opportunity for getting drunk will be.

You know who doesn’t spend all day wondering when the next time they can get a drink will come? People who don’t drink.

The problem came on my wedding anniversary, when I convinced myself that it would be fine to have a glass of wine or two – it was a special occasion, after all! But the result was what you might expect; by putting my quarter back down that chute, I had given myself permission to drink again, and the process had begun. About a year and a half later when the bottom fell out again, after several weeks of getting blackout drunk three or four nights a week.

The mistake I’d made in the past was that I kept these issues private. My wife and one close friend were pretty much the only people who ever knew about it in the past. That meant that when I decided I had the problem “under control” and it was safe to drink again, there wasn’t a lot of accountability.

This time I am not making that mistake again. I’ve told everyone in my life who I might conceivably drink with that it’s not an option for me, and now I’m putting it out there via this blog post, too. I need to remember that even though one, two, five, ten years might go by, I’m never suddenly going to be able to moderate with alcohol. It’s just not in my D.N.A.

To that end, I got rid of the keychain that I’ve used basically since it became useful to me to carry a bottle opener: I traded it in for this one, which holds a quarter. It’s ostensibly so that you always have a quarter for use in shopping carts at stores that require you to insert a quarter to unlock the cart, but to me it’s a daily reminder not to put my quarter down that gravity well chute. 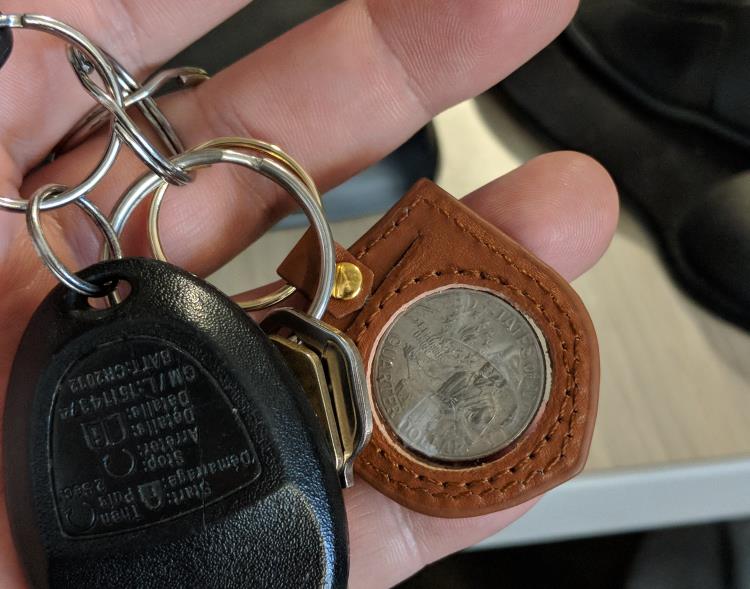